Our Version of Honoring Veterans Day

When it comes to sales, what do mattresses, cars and furniture sales have to do with the meaning of Veterans Day? Not much.

So we take a different approach every year…

Each year we post this reminder about the History of Veterans Day, we put our military service medal bracelets on sale, and we donate to some great charities.

The History of Veterans Day

At the 11th hour or the 11th day of November — the 11th month — of 1918, cessation of military hostilities between the Allied powers and Germany marked the end of World War I. President Woodrow Wilson proclaimed November 11th as the first celebration of Armistice Day, which became a legal federal holiday to honor those living and dead who fought in the Great War.

President Dwight D. Eisenhower signed the June 1, 1954, law that struck the word “Armistice” and substituted it with “Veterans”. From that day forward, November 11th honors veterans of all U.S. wars.

Canada, Great Britain, France and Australia also honor their veterans of World War I and World War II on or around November 11th. Our Canadian and British friends celebrate it as Remembrance Day. It is customary for them to observe two minutes of silence at 11 a.m.

Not to be Confused with Memorial Day

Even though there is an official wreath-laying ceremony at Arlington’s Tomb of the Unknowns, don’t confuse Veterans Day with Memorial Day. The U.S. Department of Veterans Affairs stresses that Memorial Day (the fourth Monday in May) is set aside to honor Americans who died during battle.

On the other hand, Veterans Day pays tribute to all Americans — living or dead — who served their country honorably during peace or wartime.

America honors its Living Veterans as Never Before

In the aftermath of the Vietnam conflict, veterans experienced treatment that ranged from indifference to outright disdain. This was due to the public not supporting a war in far off Asia. A ware with a less-than-clear relationship to our national security.

Veterans are now treated with great respect. Americans appreciate our volunteer servicemen and women and are grateful for the personal sacrifices these fine young people make in a most honorable profession: the military services.

Observe Your Own Two minutes of Silence

Why not set your alarm for 11 a.m. on November 11th? Then offer a prayer of gratitude and hope for the safety of every man and woman who serve our flag with dedication and selflessness.

Judi and I want to personally thank all our military customers for all you do. For fighting for freedom against the odds. For sacrificing when there are times that you may question if your efforts are appreciated.

Know your commitment and sacrifice are appreciated. Know that there are Patriots throughout our great Nation who appreciate you and thank you, and your Family, for your service. Of this you can have no doubt!

A Sale Specifically for Our Veterans

Being so many of our customers are from Military backgrounds and families, we wanted to do something that benefits our Veterans directly. We have put our Service Medal Bracelets on sale today through Monday.

We then honor Veterans Day by donating to groups that help Veterans.

We make donations each year on 11/11 to each of the following charities. Can you do the same?

And, we make it easy to show your support by virtue of our two charity bracelets whose proceeds also benefit the above orgs throughout the year: 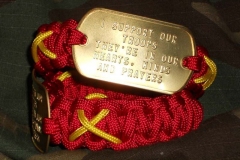 “On this Veterans Day, let us remember the service of our Veterans,
and let us renew our national promise to fulfill our sacred obligations
to our Veterans and their families who have sacrificed so much so
that we can live free.”

P.S. Here’s my article on how you can Support Our Troops.