We repost this each year so we don’t forget the horror of that day and the Patriots of 9/11/01. Please share… 18 years ago America was rocked by unprecedented events. On September 11, 2001, the sights that played before us were unbelievable and terrifying.

Our nation had never seen a terrorist attack of such magnitude. In the years since, America has fought against terrorist organizations and for freedom from fear. That day 17 years ago our nation turned inward. We sought comfort and solace from neighbors, family, friends, and strangers.

It reminded us that we are one nation, and we are a united force — we are all Americans.

Here is a timeline of the events that transpired on Sept. 11, 2001, as compiled by History.com:

In the horrors of that day, heroes rose among the chaos. Their examples are a testament to the goodness of those around us. To mark this Patriot Day, let us remember their stories, their sacrifice, and the importance of standing together against forces of evil.

There are too many heroes from that day to mention in one post. 343 firefighters died instantly when the Twin Towers collapsed on September 11 2001, along with 60 police officers and eight paramedics. To this very day the the first responders who ran to the rubble and stayed to look for survivors, are passing away due to cancer from exposure to toxic dust.

Below are inspirational stories of three everyday Americans who naturally ran to, not from, danger.

Welles was an equity trader on the 104th floor of South Tower of the World Trade Center. Crowther had trained as a volunteer firefighter as a teenager and knew how to respond in the face of disaster. Survivors describe a young, authoritative man bursting into a room of frightened people and directing them to the stairwell. He guided the injured to the healthy to help them down. Crowther saved the lives of at least 18 people that day. He returned to the crumbling building three times.

He ultimately perished and his body was recovered among firefighters and police in the lobby of the South Tower. As one of the thousands that worked in the World Trade Center, it was not his responsibility to save lives that day. He could have easily survived, but instead gave his all to ensure the survival of dozens of others who needed him.

The story of flight United Airlines Flight 93 is an amazing tribute to courage in the face of destruction. Tom was on that flight that day. He made four phone calls to his wife, Deena. In his last phone call he told his wife, “I know we are going to die. There’s three of us who are going to do something about it.”

Burnett and others fought back against the hijackers of the flight which ultimately crashed in a rural Pennsylvania field. There were no survivors from that flight. Although the intended target of that flight is unknown, it is generally believed that it was headed for either the White House or the U.S. Capitol building. Had it reached its destination, an untold numbers of lives would have been lost in addition to those from Flight 93.

Ronald was the New York Fire Marshal. He had a long list of military service. He had been in the Army for 29 years. He served in the Special Forces, Green Berets and the Defense Intelligence Agency. Later he joined the New York Fire Department and served there for 23 years before his death on September 11th. He climbed as far as the 78th floor when the building collapsed. He is the only New York Fire Marshal to be killed in the line of duty.

Freedom is a lonely battle, but if the United States doesn’t lead it – sometimes imperfectly, but mostly with honor – who will?
~ Cal Thomas

These are just some of the countless people who rose to the aid of their fellow men in a moment of panic and terror. The New York police and fire departments, employees of the World Trade Center, Pentagon, and passersby all took part in an effort to overcome the impossible.

In September 2011, the World Trade Center Memorial officially opened. It offered a sense of closure to many who lost or nearly lost loved ones that day. Two reflecting pools stand in place of the original towers inscribed with the names of the 2,983 victims lost that day; in New York, Pennsylvania, and Washington D.C., as well as the names of those lost in a bombing at the World Trade Center in 1993. 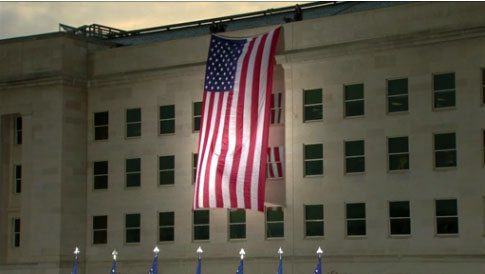 Old Glory Lowered Over the Impact Point at the Pentagon

The following lessons we can learn from September 11th:

Let us remember this Patriot Day the emotions, the heartache, and the strength that came after that clear September day. It is a reminder of both the fragility of life and imperceptible courage of the common man and woman — Americans.

We are reminded of the greatness of our Country and that for it, we shall always fight. For it is our privilege to be a citizen of the United States of America. The quote below from Abraham Lincoln in the Gettysburg Address could easily apply to September 11, 2001…

“… But in a larger sense, we cannot dedicate, we cannot consecrate, we cannot hallow this ground. The brave men, living and dead who struggled here have consecrated it far above our poor power to add or detract. The world will little note nor long remember what we say here, but it can never forget what they did here. It is for us the living rather to be dedicated here to the unfinished work which they who fought here have thus far so nobly advanced. It is rather for us to be here dedicated to the great task remaining before us – that from these honored dead we take increased devotion to that cause for which they gave the last full measure of devotion – that we here highly resolve that these dead shall not have died in vain, that this nation under God shall have a new birth of freedom, and that government of the people, by the people, for the people shall not perish from the earth.” ~ Abraham Lincoln

Today we also remember those who sacrificed so much in the War on Terror after 9/11. Visit our Wall of Heroes and pay your respects.

P.S. Help spread this story about this important day in our Nation’s history! Do me a favor and share this post!